Samgyetang for Those Who Are Fatigued
from the COVID-19 Pandemic 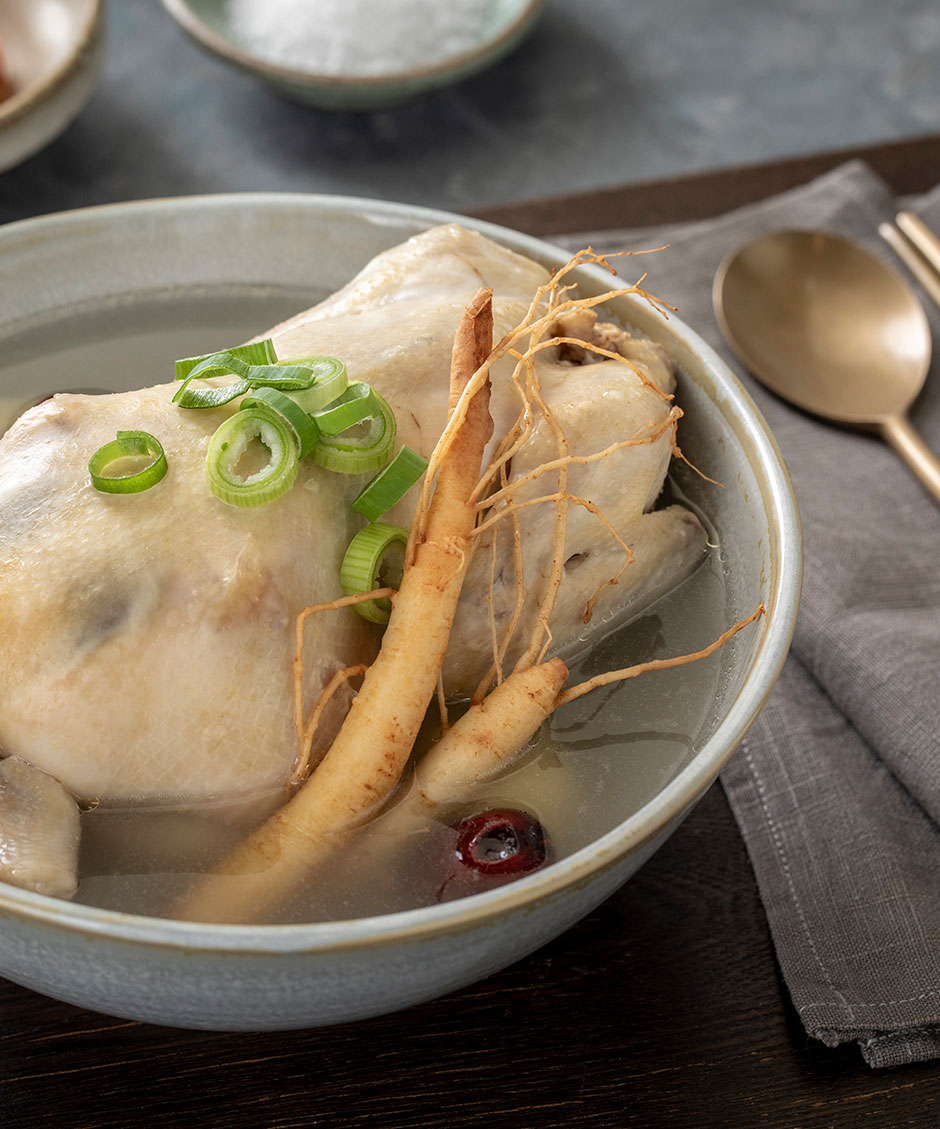 In Korea, there is a long tradition of eating superfoods on the three bok days, chobok, jungbok, and malbok, as a way to boost one’s health and energy in the sweltering heat.

Samgyetang, or ginseng chicken soup, is made by boiling chicken with ginseng, garlic, jujubes, chestnuts, glutinous rice, pine nuts, and so on, and it is one of the most popular dishes eaten by those who are exhausted from the summer heat. When the temperature rises to extreme levels in summer, our body loses water, minerals, and other substances via perspiration. By eating samgyetang, made with protein-rich chicken and other nutritious ingredients, we can boost our immune system as well as our energy. Not only that, samgyetang ingredients have warm properties that help protect and soothe the gastrointestinal system from all the cold foods consumed in the summertime.

Samgyetang, of course, contains ginseng, which is registered as Globally Important Agricultural Heritage. Ginseng has anti-aging and anti-cancer properties and promotes metabolic activity, energy, memory, and the immune system. Geumsan in Chungcheongnam-do Province, a 30-min drive from Daejeon, is a famous ginseng producer that hosts the Geumsan Ginseng Festival every October. It is an iconic festival that attracts countless visitors from across the country and the world who come to buy ginseng and try diverse foods and teas made with ginseng. 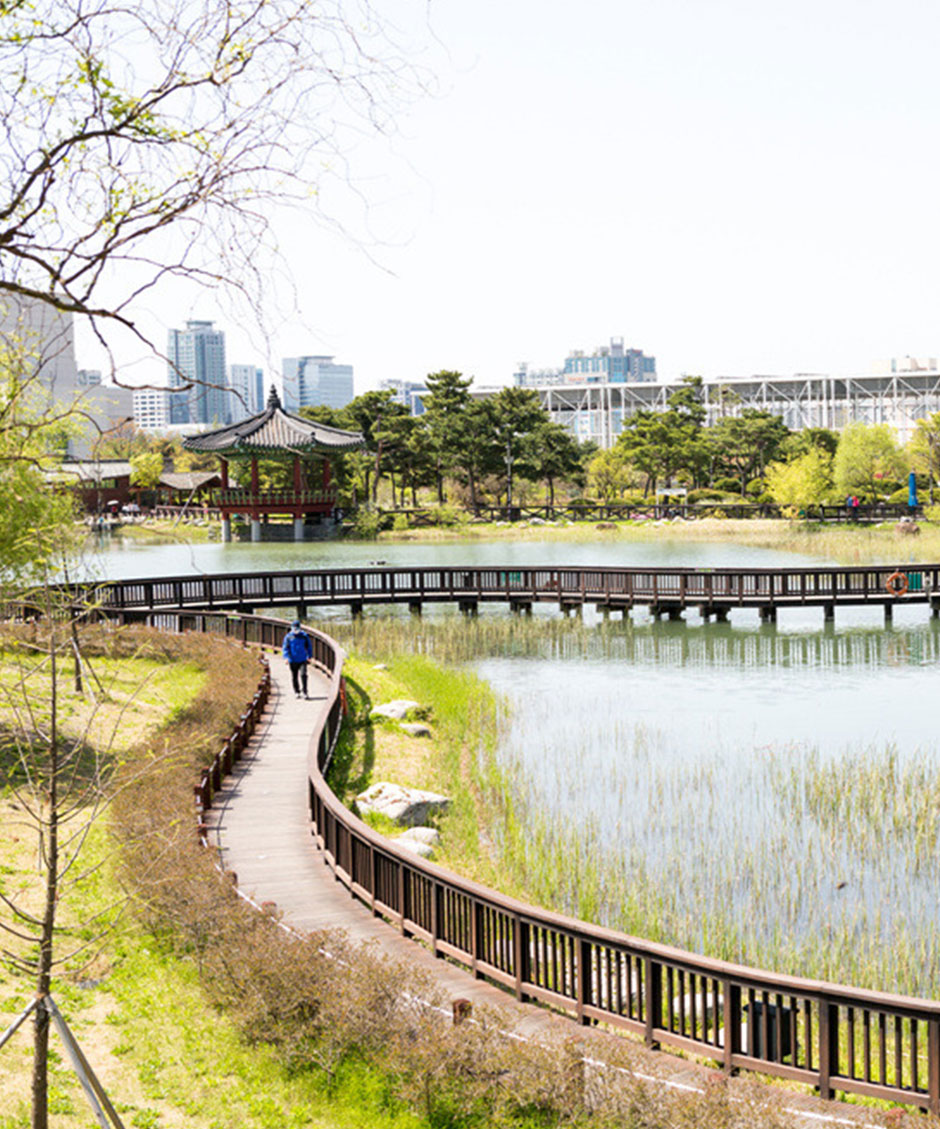 Hanbat Arboretum established in the heart of Daejeon is the largest man-made urban arboretum in the central region of Korea, where visitors can enjoy lush greenery and relax.

The West Garden consisting of 15 thematic areas, including the Wetland Garden and Wildflower Garden, was the first part of the arboretum that became open to the public in 2005. Then, in 2009, the East Garden comprised of 15 thematic areas, including the Magnolia Garden, Medicinal Herbs Garden, Rock Garden and Fruit Garden. This was followed by the opening of the Tropical Garden created under the theme of “mangroves” in 2011.

As soon as you enter the West Garden, you will be faced with a grass field where children are laughing and playing. As you walk along the flower-lined path, while looking at the greenery beyond the park, you will pass the Wildflower Garden and soon arrive at a wetland where your nose will become filled with the scent of lotus leaves. A slow stroll along the decked path circling the wetland will give you a chance to relax in the bosom of nature, while enjoying the fresh breeze and a sense of well-being surrounded by pines and Mongolian oaks that emanate phytoncides.

Follow the path that leads to the East Garden and another exquisite garden will unfold before your eyes, next to a lake. There will be colorful flowers greeting you, regardless of the season, and you will be able to enjoy a relaxing stroll along the promenade on the lakeside. Experience the four seasons of Korea at Hanbat Arboretum, which features magnolias in spring, roses in summer, and colorful foliage in fall.

How to Enjoy Hanbat Arboretum to the Fullest

If you are visiting in a group of 10 or more people, book in advance for a guided tour. You will be able to explore the arboretum with your very own special tour guide, who will share with you his/her knowledge about the origins and uses of the plants and how to distinguish similar-looking plants and various other interesting information.

As you walk around the arboretum while taking in the breathtaking view and the spectacular skyline of Daejeon, you will come across Daejeon Culture & Arts Center, Daejeon Museum of Art, Leeungno Museum, and Daejeon Yeonjeong Korean Traditional Music Center. We suggest that you check out some of the shows and exhibitions that are being held at these places.