Ensol Biosciences, established in 2001, has successfully developed the Knowledge-based In Silico Drug Discovery (KISDD), a new drug candidate search platform, and the Ensol Trans-Omics Network System (ETONS) designed to identify the targets and mechanisms of new drug candidates using big data and AI. Using KISDD and ETONS, the company plans to develop peptide-based agents for targeted therapy focusing on diseases for which there are currently no effective treatments available and to transfer them to global pharmaceutical companies. Using this business model, Peniel 2000 (P2K) for degenerative disk disease has been licensed out to Spine BioPharma in the United States, and Phase II and Phase III clinical trials will begin soon. EAD 100 (Product name: JointVex), an osteoarthritis treatment agent for animals, was licensed out to one of the top 10 animal pharmaceutical companies in the world in March 2020. On the other hand, Engedi 1000 (E1K), an osteoarthritis treatment agent, is currently being examined in a Phase 1b clinical trial in Korea. The company is also developing a number of other new drug candidates such as an anticancer agent for triple-negative breast cancer (TNBC), a treatment agent for Alzheimer's disease, and a treatment agent for Type 1 diabetes (T1D). Boasting such a wide array of new candidate drugs and technologies, Ensol Biosciences was selected as prospective unicorn company for support by the Ministry of SMEs and Startups in recognition of its technological prowess and growth potential.

Degenerative disk disease (DDD), one of the main causes of chronic back pain, occurs as a result of degeneration of the intervertebral disk (IVD), which absorbs impact between vertebral disks and provides flexibility to the spine. It can greatly limit the activities that the individual can perform and lower the quality of life. Globally speaking, an estimated 260 million people suffer from DDD, and in advanced countries, about 60 to 70% of the population will suffer from DDD in their lifetimes. IVD degeneration may occur naturally as part of aging, but it may also progress gradually and irrevocably and occur in a person in the early 20s. Back pain and reduced motility due to DDD generally affects people in their 30s to 50s.

As for Peniel 2000 (P2K), a treatment agent for DDD, the primary treatment objective is pain relief and the secondary treatment objective is regeneration of disk tissue. Nerve growth factor (NGF; pain factor), nerves and TGF- β1 are found in large amounts in disk tissues where there is pain, and when P2K is injected into the disk, it binds to TGF-β1 and this inhibits the expression of the gene coding for NGF, thereby reducing pain. By binding with the overexpressed TGF-β1, it inhibits Smad1/5/8 signaling and partially suppresses Smad2/3 signaling, thereby increasing the expression of Type II collagen and aggrecane. Type II collagen activates disk cells and induces synthesis of extracellular matrix (ECM). It also makes disk cartilage cells become like notochordal cells, which are precursors to nucleus pulposus cells, and thus promotes disk regeneration. 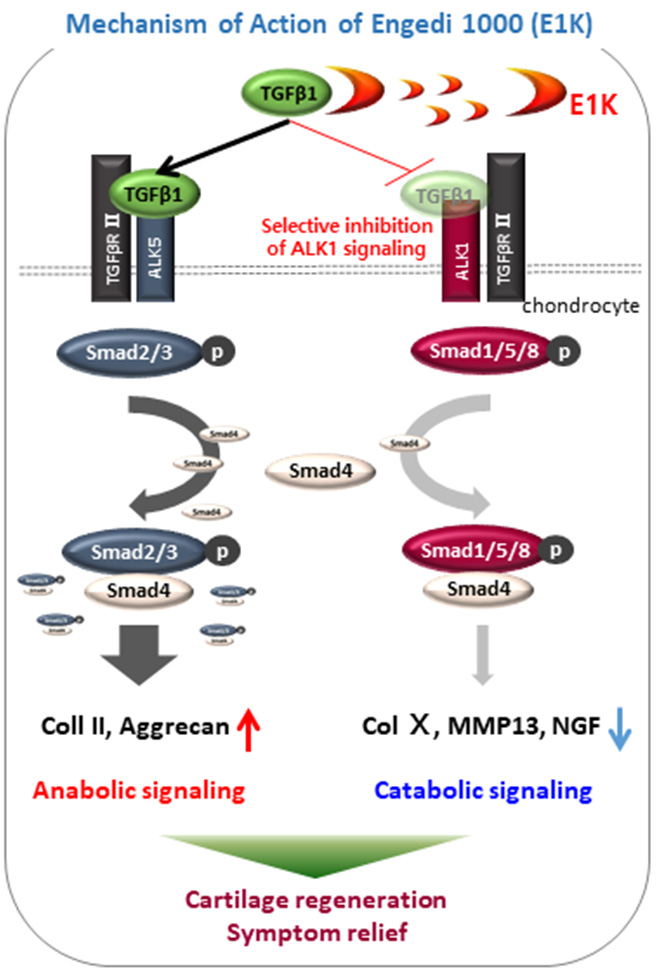 Degenerative arthritis, also known as degenerative joint disease and osteoarthritis, is characterized by gradual loss of articular cartilage accompanied by secondary changes and symptoms. Due to the gradual damage or degenerative changes in the joint cartilage that absorbs shock between the bones forming the joint, a secondary injury occurs in the bones forming the joint, synovial membrane, nearby ligaments, etc., resulting in pain, deformation, and dysfunction. It is the most common type of inflammatory diseases affecting joints. According to the data released by a market research agency called Technavio (Global Osteoarthritis Therapeutics Market 2020-2024, Technavio), of people who are aged 60 and older, 10% of men and 18% of women suffer from osteoarthritis. The market for osteoarthritis treatment agents is expected to grow to USD 10 billion (approx. KRW 11 trillion) in size by 2024, but since this estimation was made based on relatively cheaper drugs, such as painkillers, a launch of an actual treatment agent will expand the market size tremendously. In Korea, in particular, there are more than 4 million osteoarthritis patients, as of 2019, according to the National Health Insurance Service of Korea.

Engedi 1000 (E1K), a treatment agent for osteoarthritis, is similar to P2K in terms of treatment direction, but instead of affecting the Smad2/3 signaling pathway, it only inhibits Smad1/5/8 signaling. Peniel 2000 (P2K) for degenerative disk disease and Engedi 1000 (E1K) for osteoarthritis developed by Ensol Biosciences consist of short peptides of biological origin. That is, these two treatment agents are made from amino acid chains of proteins existing in living organisms, instead of being produced by chemical synthesis reactions. The active ingredients were found by searching for a substance that exists in all vertebrates, based on the hypothesis that all vertebrates naturally have substances that prevent cartilage degeneration and promote regeneration, and they were used to synthesize the drugs in question. Ensol Biosciences have carried out clinical trials as well as animal testing and obtained approval for an osteoarthritis drug for animals in February 2020. The drug is currently supplied to some 600 veterinary hospitals to be used to treat countless companion dogs among other animals. While there were many medicines for DDD or osteoarthritis that were shown to be effective during animal testing but not clinical trials involving human subjects, Ensol Biosciences’ P2K and E1K are much more likely to be effective in humans, as they are made from substances that naturally exist and have shown to be effective in vertebrates, including humans.

The results of the Phase 1a clinical trial on E1K in Korea were announced this past April. The clinical trial conducted with 24 human subjects did not result in any abnormal findings in relation to the safety assessment variables, such as vital signs, ECG, and lab test results, and there were no adverse reactions or events. Based on the results, it was concluded that E1K is a safe treatment agent that has no toxicity in the human body. It also helped alleviate pain 2 weeks and 4 weeks after administration (based on the visual analog scale, VAS), and this was consistent with the results in the animal testing. As such, it was demonstrated E1K has high potential to be successfully developed as a drug for humans.
Ensol Biosciences believes that P2K and E1K will soon liberate mankind from the pains and sufferings caused by degenerative disk disease and osteoarthritis.